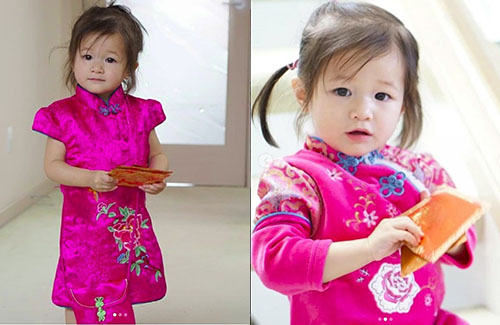 Happy mother Linda Chung (鍾嘉欣), who just spent her Lunar New Year in Vancouver, shared some pictures of her daughter on social media while wishing her fans a happy year of the dog.

The 33-year-old TVB actress, who is married to non-celebrity Jeremy Leung, shared two pictures of her 1-year-old daughter Kelly wearing different traditional cheongsams. Linda wrote in Kelly’s voice, “Happy belated Chinese New [Years] to everyone. It’s the second day of the Lunar year here in Vancouver. To all uncles and aunties: I wish you great health, success, happiness, and peace!”

It has been a while since Linda shared a full portrait of Kelly, and many fans are leaving comments expressing that the baby girl has grown, and will grow into a beautiful girl like her mother.

Happy Year of the Dog!

59 comments to Linda Chung’s Daughter Greets Everyone for CNY