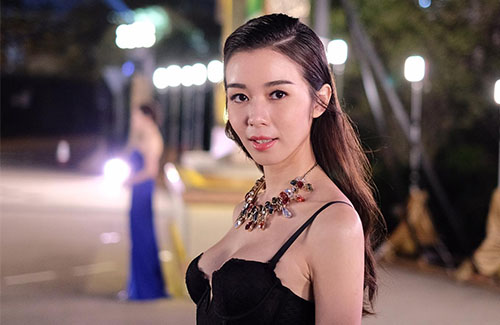 The viral #MeToo movement, which started in October, has encouraged many women across the world to share their experiences with sexual assault and harassment. In Hong Kong, hurdler champion Vera Lui (呂麗瑤) was the first high-profile local star to join in the global #MeToo movement, sharing that she was once sexually harassed by a former coach.

Influenced by Vera, TVB star Louisa Mak (麥明詩) also stepped up to the stage to talk about sexual harassment. The Miss Hong Kong winner publicized her own experience on Facebook, and shared that she had been sexually harassed more than once.

“Me too. I believe than many young girls have experienced sexual harassment before,” said Louisa. “I was no exception, and it happened more than once; some beyond my control; some I could have stopped if I was more aware…. For victims to have the courage to face it, and to know that the fault is not on you, that is the first step. But what happens afterwards?”

Louisa, a law student of Cambridge, then offered some legal tips to fellow victims of sexual harassment, hoping to bring more awareness on the many possible ways where perpetuators can get punished by the law.

“It was only me and him at the time,” she said. “The argument was going nowhere. Why should you believe me more than him? It was only a 50:50 suspicion, meaning that he only has a 50:50 chance of being guilty. I was still studying law at the time.”

The 26-year-old expressed that circumstantial evidence is important. Where the incident took place could work more on the victim’s favor—for example, being harassed at the perpetuator’s home rather than at a work environment. Having records of interactions with the perpetuator, such as text conversations, before and after the incident is also incriminating evidence.

Those strategies may not be convincing enough to prove sexual harassment, but it gives the perpetuator one less excuse to defend.

Louisa continued, “Of course, if a girl in shock, it isn’t possible to consider all of these things. I didn’t consider these things until much afterwards, when I continuously recalled and reflected on the incident. This is why I hope these tips can help those girls who have not been victims. I believe that law is the closest thing to a fair judgement. It isn’t perfect. There would definitely be criminals who continue to roam free, but law has a guaranteed procedure. I hope everyone gets an opportunity to be heard.”

The My Ages Apart <誇世代> actress added that as a result of her experience, she has enrolled herself in martial arts classes to defend herself. “I am not trying to win a fight with a man; all I need is for myself to be able to create an opportunity of escape.”

As for why Louisa did not seek legal action against her perpetuator, she said, “This incident happened in the mainland. The Hong Kong courts have no jurisdiction.”

She added one last time, “I am really not a lawyer, I have just studied some theories. I don’t remember a lot of what I was taught, so I too need to seek the help of a professional lawyer. Boys should protect themselves too. Sexual harassment is not only patented by girls.”

25 comments to Louisa Mak Opens Up About Sexual Harassment: #MeToo