Many see Moses Chan (陳豪) as a loving husband, dedicated father, and a coffee aficionado. In recent years, public focus has switched from his work to his family, but Moses wants to divert attention back to his acting. Possessing a diversified resume, Moses has been able to handle different roles even when they are exaggerated characterizations.

Not Picky About His Roles 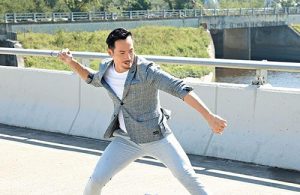 From the shy Dak Dak Dei in Heart of Greed <溏心風暴>, to the brutal and violent Hak Jai in When Heaven Burns <天與地>, to the naïve, rule abiding architect in Ghost of Relativity <鬼同你OT>, to a character who goes through a huge personality change in My Ages Apart <誇世代>, to the cool assassin in Death by Zero <殺手>, every role Moses has portrayed has been very refreshing. It leads one to wonder how Moses chooses his scripts? The answer is that he is not picky about what type of dramas to film.

Joining TVB in 2000, Moses has never declined a role unless there is a scheduling conflict. “If we constantly choose which characters to act, then we’ll always end up picking ones that are suitable for us. We’ll never be able to jump out of our box. I want to be able to break out of this box, so it is important to be flexible and see how others view us. Through these different experiences, maybe we will be able to discover a side of ourselves that we did not know exists. Also, we’d be able to have new chemistry with our co-stars,” Moses revealed.

Winning TVB Best Actor for 2007’s Heart of Greed, Moses’ goal is to continuously improve himself. As an experienced actor, he is ready to transition to a new role at a moment’s notice and does not need much time to rest in between projects. “My attitude is that I must always be ready. Meaning at any time, I can grab my bag and go out and not be caught still packing at the last minute.”

In contrast, Moses used to spend too much timing reading the script and memorizing his lines. His experience has taught him how to prepare in the right way. “Many people often say that I don’t read my script. Usually, I have already finished reading it. I will only put down my script when I have digested it, and know how to handle the role.”

With his experience and popularity, it is easy to become arrogant, but Moses remains modest and always thanks the production crew for their work. It often takes a team to make an actor shine. “As much as I want to show a different side of me, I still need the script, director, and the team to work with me to make this happen. I always say that you should not become egocentric, because a drama is a team effort. If you only care about your own appearance, then the whole situation changes. Encountering a team that is in sync with you only enhances your acting.”

Younger Artistes Remind Moses of Himself

Many new actors have joined TVB in recent years, and Moses has collaborated with many of them. Working with younger artistes allows Moses to see a shadow of himself. Working hard is the first step. “Once the audience has accepted them, then they will have more chances to land a role that has a lot of room for growth. I often talk with the new actors, but they often feel a little pressured talking to me. Some will actively seek out advice from me, and I am happy to share with them. Mostly importantly, they must have passion. Sometimes our intention is to help others and for those that want to improve, this is invaluable advice. For those that don’t, they only view you as a nuisance.”

Times have changed and drama ratings also count views from online platforms, and now shopping can be done through an app. As someone who was active during the golden era of television, Moses is accepting of change, which he feels allows greater room for growth. “I feel that these changes don’t mean that we have to get rid of the old ways of doing things, but technology is continuously improving…. We just have another avenue for our work, so that everyone has easier access.” 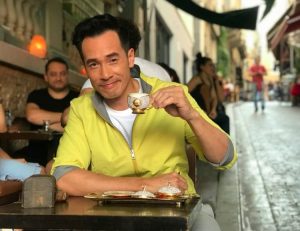 Co-stars often share that filming with Moses is fun, because he is a professional actor but he also understands how to relax and have fun. Joking and creating a positive atmosphere makes it more enjoyable to work together. Bonding over a cup of coffee is one of Moses’ favorite activities. “After I educated them more, they’ve learned how to compare different coffees and they can see the difference between good coffee and regular ones from the canteen.” He joked that he is the reason why people don’t want to drink regular coffee anymore.

Due to his love of coffee, he set up a coffee roastery in Tsuen Wan in 2016, and followed up with the launch of his first café Blooms Coffee in a shopping mall last year. He is very involved in the business and handles the branding, marketing, and inventory. “It took a long time to set up everything! My target is to open more shops but due to the pandemic, I am forced to slow everything down.”

Despite his dual roles as an actor and a café owner, Moses spends his free time at home with Aimee Chan (陳茵媺) and their three children. He enjoys family time, and nothing makes him happier than returning home and hugging his children. When talking about them, Moses’ tone grows noticeably excited.

It would seem that he is a pushover and often gives into his children, but Moses is actually a strict father! “For example, when teaching them how to write, my eldest son was crying, but I was insistent that he erase and write everything again. I will not let him go until he learns how to write properly. It is fine if he cries, it just means that we will spend more time until it is done.”

As he is a very disciplined person, Moses hopes that his children will be the same. “I want them to learn how to be proactive, self-disciplined, self-aware of their shortcomings so that they know where to improve.” Aware that his three children are still young, Moses will not burden them with unachievable standards and he realizes they have different personalities. “My eldest son is smart, but his ability to focus is very weak. My second son has the ability to focus and even though he may be slow in completing tasks, he has a lot of patience and is orderly. My daughter likes to delegate tasks and be doted on. I am also scared of spoiling my daughter, so it is important to teach them well. Luckily, her brothers do not particularly accommodate her and they often fight!” 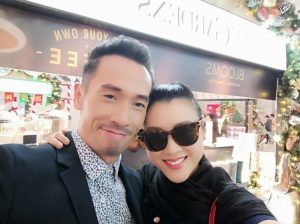 Another reason Moses loves going home is obviously to spend time with his beloved wife, Aimee! He shared that he has never argued with Aimee about their children, and he understands the importance of communication.

A little appreciation can go a long way, as Moses reveals, “From the beginning, I realized that I have two separate relationships, one with just my wife and the other with her and our children. It is important to not always place your children first, in order to maintain a harmonious relationship with your wife. Everyone needs to spend time together, and allow your partner to feel your love for them. She has a tough time raising three young children. As a husband, it is important for me to let her know that I are grateful for her sacrifices.”

Other than buying Aimee flowers, Moses makes sure to follow their tradition of taking an annual vacation without their children so they can have quality couple time together. Even though they are not able to travel this year due to the pandemic, they have plans for a domestic trip. The destination is never the focus, what is most important is the time that they spend with one another.

Moses Chan: “Aimee Chan is My Angel and Lights Up My Life”