Despite the public often speculated that the Yang Mi (楊冪) and Hawick Lau’s (劉愷威) marriage was falling apart, their divorce announcement still caught many by surprise. In trying to digest the news, many looked at Yang Mi’s recent interview which seems to indicate that she enjoys being single again. 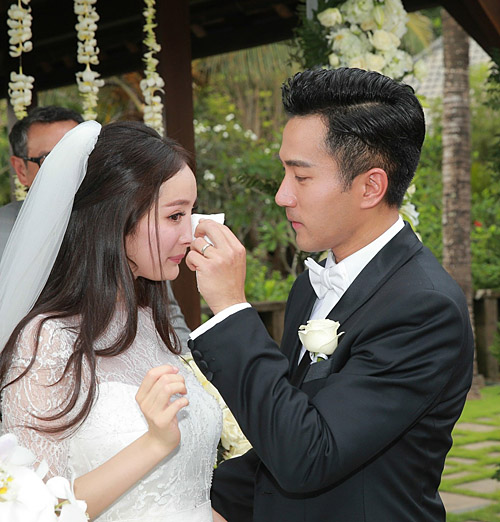 Five days before the couple announced their divorce, Yang Mi’s interview was released and her responses show the problems in her marriage. When asked if Yang Mi would go back to the past, Yang Mi responded that the past is the past and she would not think too much of it, “Looking back is meaningless and a waste of time. Regardless if the events in the past are good or bad, they are all in the past.” Yang Mi also added that she enjoyed living in the present.

In the interview, Yang Mi, who often avoided talking about her four-year old daughter “Little Sticky Rice”, was very talkative about their lives together. Yang Mi said the ‘Little Sticky Rice’ is very outgoing and has a lot of questions. With childlike innocence and curiosity, Yang Mi felt that her daughter’s personality is very different from herself when she was a child. Yang Mi felt that everyone has a way of being themselves.

Many netizens speculated that Yang Mi’s demanding career gave her little family time with Hawick and their daughter, which ultimately led to the couple drifting apart and their divorce. Since “Little Sticky Rice” is raised by Hawick’s parents in Hong Kong, Yang Mi can only see her on her days off.

According to one netizen’s calculation based on Yang Mi’s flight schedule, the 32-year-old apparently spent 23 days in Hong Kong with “Little Sticky Rice” in 2016; 8 days in 2017; and 5 days in 2018. In three years, Yang Mi allegedly only spent 37 days with her daughter.