The actress’s image takes yet another hit.

Since marrying Huang Xiaoming (黃曉明), Angelababy (楊穎) has focused her career on the Mainland Chinese market and rose to become lead actress in many dramas and movie productions. Despite her high popularity, a good reputation did not follow suit, with her works being criticized and made fun of by netizens. Appearing as a guest on variety show Adventure Life <奇遇人生>, she was again criticized for having numerous demands, causing the originally acclaimed program to be hit by a barrage of negative feedback.

The reality show Adventure Life aired last year and saw Taiwanese host Aya Liu (阿雅) lead 10 celebrity guests to try out novel experiences in different parts of the world. Revealing the inner emotions of usually glamorous celebrities through the rich experiences they undergo, viewers have described the program as mundane yet earnest, winning it much praise.

Guest-starring in the first episode of the second season, Angelababy and Aya join Xu Yukun’s (徐玉坤) incredible journey on bicycle, and complete the last leg of the 73 year-old’s “12 kilometer journey within 12 years”.

Set to culminate in Vancouver, Angelababy behaved normally on the first day she joined in the bike journey. However, she chose to spend the night with Aya at a hotel while Uncle Xu was setting up a tent to sleep by the roadside, in addition to revealing her grievances then and saying she did not want to continue cycling.

As the two ladies arrived late on the second day, Uncle Xu chose to set off on his own in order to keep up with his schedule. Aggrieved, Angelababy had said, “He wants to abandon us,” causing netizens to criticise her as being self-centered and putting the blame on others while she herself was late. 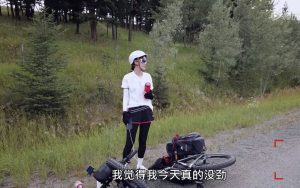 After that, the two chose to take a car to catch up with Uncle Xu, meanwhile he stated clearly that they had to follow his rules and that he would not stop to wait for them. Although she had already cycled halfway through the journey, Angelababy then remarked that her period was here and she had no strength to continue, switching to a car journey instead and leaving Aya to complete the day’s schedule with Uncle Xu.

On the third night, Uncle Xu insisted that the two sleep in the forest tent like him to truly experience his bicycling journey, but Angelababy was displeased and complained about there being no toilet and water, prompting Uncle Xu to remark “Never experienced big storms and rains and always comfortably nested,” hinting at the actress’s spoiled personality.

Even the show’s director was dissatisfied with Angelababy’s performance, saying, “I realize you give up very easily; are you guys here to cycle or sit in a car?” He also berated her for affecting the schedule by taking much time to prepare and do make-up, which went against the spirit of the show to reveal the genuine side of artistes. To this, Angelababy rebutted by saying, “This is respecting the viewers.”

Netizens pointed out that the good spirit of season one guest stars such as Dee Hsu (徐熙娣) and Jessie Li (春夏) who all went on the show without makeup and concentrated sportingly on the activities arranged for them brought out Angelababy’s Princess Syndrome even more.

Previously, she had been criticized for pocketing 40 million yuan income for General and I <孤芳不自賞> but for filming the entire drama in front of a green screen and relying on photoshopping later, or using a stand-in actor. Although Angelababy explained that it was because she was pregnant then, netizens felt that she was disrespectful of the acting profession.

She also took hit for her exaggerated expressions in the drama My True Friend <我的真朋友>, which caused the ratings to fall. It seems much work is needed for her to shed her “Princess” image.