Edison Chen Attacks Lin Chi-ling On Social Media: “I Had to Do It” 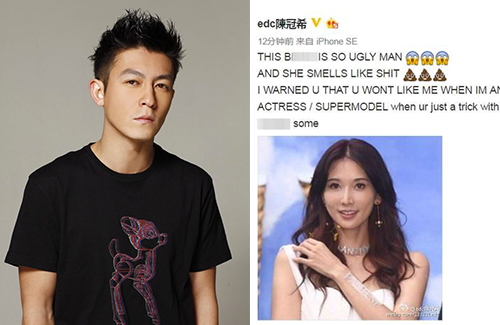 Edison Chen (陳冠希) has declared war against Lin Chi-ling (林志玲) and he’s not backing down.

On Wednesday (July 27), the actor-turned-businessman suddenly went on a raging rant against the Taiwanese model-actress on his Sina Weibo, barking out one insult after another.

He shared a portrait of Chi-ling and posted, “This b**** is so ugly man, and she smells like s***. I warned [you] that [you] wont like me when [I’m] angry, Miss Pretend to be actress/supermodel when [you’re] just a trick with a entertainment deal cuz u s***** some.” About an hour later, Edison deleted the above Weibo post and followed up with a message written in Chinese.

His update said, “Why did I scold her? She knows why, I already warned her before. You guys should ask her! Thank you for your cooperation. You may say that I’m in the wrong, but I feel she’s more in the wrong.”

The media contacted Lin Chi-ling for comment. She responded through her representative that she doesn’t know what’s going on and neither does she know Edison on a personal level. Her representative said, “[She] doesn’t know him at all. We don’t know what’s going on. [She’s] been working every single day in the past few weeks. [They] never contacted and [she] does not know him.”

A while later, Chi-ling’s representative released a second response in regards to Edison’s second Weibo message. The representative said, “It’s frustrating to suddenly receive such damage. We will try to understand what’s going on. This came out of nowhere!”

That night, Edison left one last message about his debacle with Chi-ling on Weibo, saying, “In the end all truths reveal themselves. If you don’t like me, then don’t follow me!”

Edison and Chi-ling stayed quiet on the matter all throughout Thursday (July 28), but on Friday (July 29), when Edison attended an event in Shanghai, he did not shy away from media questions and boldly explained why he did what he did.

“I was speaking up for the person I care about the most,” he said.

Edison did not drop a specific name, but the media is speculating that he was referring to his girlfriend, Qin Shupei (秦舒培). As for an explanation behind the Weibo post, Edison said that he and Chi-ling had privately contacted each other three times before he made that post. Because Chi-ling never responded to any of his messages, he decided to call her out in public.

23 comments to Edison Chen Attacks Lin Chi-ling On Social Media: “I Had to Do It”