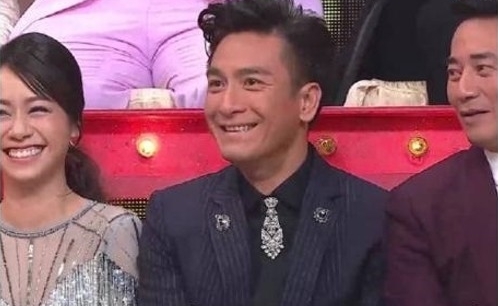 On November 19, the Favorite Acting awards in the Singapore and Malaysia regions were presented at the 2018 TVB Anniversary Gala for the first time ever. The results were surprising as both Benjamin Yuen (袁偉豪) and Mandy Wong (黃智雯) snagged two My Favorite Actor and My Favorite Actress awards respectively. Although Kenneth Ma (馬國明) in Deep in the Realm of Conscience <宮心計2深宮計> was one of the top three contenders for Singapore, he ended up losing in the TV King race once again.

Despite the 44-year-old actor successfully winning the audience’s hearts since his debut 19 years ago, he has never been given the TV King title – be it at the TVB Anniversary Awards, Singapore’s Starhub TVB Awards, or TVB Star Awards Malaysia. Even though Kenneth has been nominated for the award each year since 2015, it seems as if he is just running on the sidelines. Last year, he was a hot contender for his performance in the well-received drama, The Exorcist’s Meter <降魔的>, but only managed to snag TVB’s My Favorite Male Character.

Even so, Kenneth never complained about the hardships and focused on honing his acting skills. He would watch his colleagues receive the Best Actor accolade while he sat in the audience, even making headlines for displaying stunned expressions over the results. In recent years, the artist has managed to stay composed at award shows. At the TVB Anniversary Gala this year, he was seen clapping for Benjamin after losing to him in the Singapore region.

“I don’t need to console him,” Kenneth’s girlfriend Jacqueline Wong (黃心穎) said. “Those who know him will know he doesn’t have a strong interest in awards.  But yesterday I saw that a lot of people voted for him – Kristal Tin (田蕊妮) said she was all in… a lot of people said that and actually, even my team was all in too. I think that’s even better than winning an award. Awards can’t define your acting and they are hard to predict.”

However, there are still netizens who pity Kenneth’s lost and even crowned him as the people’s TV King. They left messages online to show support and complained saying he should’ve won the prize. Meanwhile, hot out of the oven TV King Benjamin acknowledged Kenneth’s large group of supporters.

“I know there were a lot of colleagues at the [gala] who supported Kenneth,” Benjamin expressed. “So I was also really surprised when I also won the Singapore award in the end. This is a great motivation for me, hopefully, I can continue to do better, and I will keep on proving to everyone that I can act and not the so-called wooden expressions. I see a lot of feedback saying that and I have to thank these friends for commenting on my acting or else I wouldn’t work so hard to do better.”