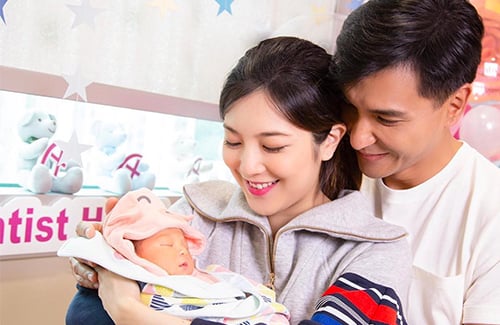 The couple respectively announced the good news on Easter Sunday, April 21st, through their Instagram pages. Quinta was most likely born some days before, as new photos of Phoebe on her 29th birthday (April 19th) showed the TVB starlet without a pregnant belly. 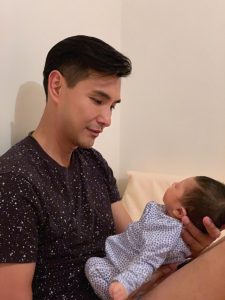 “Ruco and I are so happy!” Phoebe told the press. “I feel happiness and bliss when I look at her. She’s always smiling. So adorable! I hope she’ll grow up healthily!”

On asking who Quinta resembles more, she said, “Sometimes she looks more like me, sometimes more like Ruco.”

Ruco stayed with Phoebe throughout her delivery process, and even had the opportunity to cut her umbilical cord. As Quinta was delivered via C-section, Phoebe was under general anesthesia. She did remember that Ruco had tried to make her laugh, asking questions like why the baby had curly hair and providing her with direct commentary. “Wow, now she’s vomiting white foam!” he had said. Phoebe couldn’t help but to laugh.

On naming their daughter, Phoebe shared, “Quinta was a name suggested by my younger sister. I think it’s a great name! Q is right in between P and R. It represents that her parents will always be there to protect her.” Phoebe has already begun breastfeeding Quinta.

Ruco and Phoebe tied the knot last October, when Phoebe was already a few months pregnant. They confirmed their pregnancy in November.