Photos of Andy Hui (許志安) and TVB actress Jacqueline Wong (黃心穎) caught kissing in a taxi surfaced today. Married to Sammi Cheng (鄭秀文) for five years, Andy issued a tearful apology for his “disgusting” behavior at a press conference. Andy said, “I have to deeply apologize to Sammi and my families because I committed an unforgivable mistake.”

It was reported that Andy and Jacqueline were making out in a taxi for over 16 minutes, kissing and touching each other intimately. Taking the initiative, Jacqueline even boldly caressed Andy’s thigh throughout the kiss.

Dating Kenneth Ma (馬國明) for over two years, Jacqueline’s cheating came as a big surprise. The couple spends their holidays with each other’s families and was speculated to be getting close to marriage. With the outbreak of the scandal, Jacqueline’s image took a beating and her career at TVB will likely come to a halt.

Appearing in a press conference this morning, Andy said that he had drank too much alcohol and got carried away in a moment of lust. All his current projects, including upcoming concert plans, will come to a full stop as he reflects on his actions. Unable to hold back tears, Andy apologized to his wife, Sammi, for betraying her trust.

Crying into the microphone, Andy said, “I’m here today to bear the full responsibility of my own actions. That night, I really drank too much, but alcohol is not an excuse for making this mistake. I’m very regretful and can’t even face and forgive myself.”

He continued to berate himself, “After seeing the reports, I feel very ashamed. I’m truly wrong, hateful, disgusting, and unrecognizable. I have deeply reflected and asked why I couldn’t have stopped myself from making this mistake and controlling my lust.” 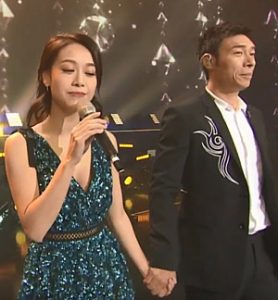 Jacqueline and Sammi Are Also Friends

Andy and Jacqueline have known each other for some time, and even sang a duet together at charity show Gala Spectacular <星光熠熠耀保良> last year. The 30-year-old actress likes to flaunt selfies with many male stars, and Andy has appeared in her Instagram posts in the past.

However, many were shocked that Jacqueline and Sammi also seem to be good friends, as they go to the same gym and took photos of their workout sessions together.