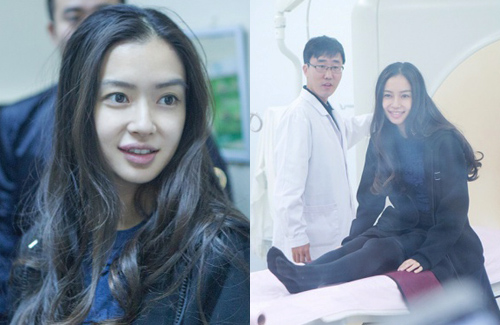 For years, Angelababy (楊穎) has been dogged by rumors that she underwent plastic surgery in order to attain her current facial features. She recently had her face examined by a well-known plastic surgeon in order to prove that she has never gone under the knife.

Angelababy visited a plastic surgery hospital in west Beijing on October 15. There, hospital chief Qi Zuoliang (祁佐良), who is also a renowned plastic surgeon, took X-ray photos of her face and conducted further examinations of her facial features, including her forehead, nose, eyelids, mouth, cheeks, and the corners of her eyes. During the inspection, Angelababy did not wear any makeup.

Following the examination, Qi confirmed that Angelababy’s face was natural and had no trace of surgical incisions. He added that although she did have braces when she was younger, this is considered a normal form of teeth-straightening and should not be categorized as plastic surgery.

The surgeon also spoke up about Angelababy’s double eyelids: “Double eyelids that are achieved through plastic surgery usually have two very obvious layers. Baby is unlike most other people; she naturally has several layers.”

Angelababy’s decision to have her face examined is the result of an essay posted by a mainland Chinese beauty clinic called Ruili in 2012. The essay, which is titled “Angelababy’s Plastic Surgery Failed, and Netizens Say Her Chin is Extremely Unnatural,” also contained photos of the actress before her alleged surgery.

In response, Angelababy filed a complaint against them for defamation and violation of her portrait rights. Although a Beijing court ruled in her favor in May of this year, Ruili refused to provide compensation and filed for an appeal. As a result, the court suggested that Angelababy undergo a facial examination.

Angelababy has been fighting plastic surgery rumors as early as July 2010, when a weekly publication claimed that she had been continually going under the knife for the past seven years. At the time, Angelababy had already considered finding a doctor to examine her face, but none of the doctors in Hong Kong were willing to do so. Thus, she followed Fan Bingbing’s (范冰冰) example and looked for a hospital in mainland China.

“It’s very exhausting bearing this pressure,” said Angelababy, who has previously stated that her unique looks come from her quarter-German ancestry. “I don’t want to be attacked by magazines or netizens anymore. If it’s true that I underwent plastic surgery, I will admit it, but I did not do it.”

Angelababy’s husband, Huang Xiaoming (黃曉明), has expressed his support of her: “Everyone says she’s gotten plastic surgery, but that’s because nobody has seen what she usually looks like. I’m not an idiot. I know she hasn’t gone under the knife.”