Etta Ng in New Video Clip: “I Want to Find My Father” 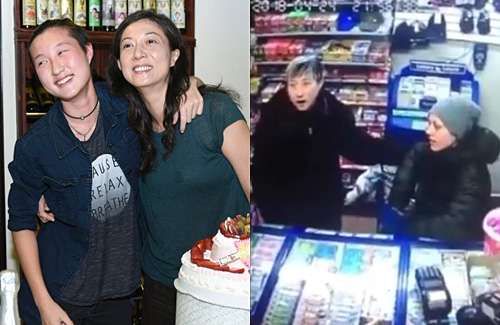 Elaine Ng (吳綺莉) panicked when her 18-year-old daughter, Etta Ng (吳卓琳), disappeared without a trace for five months. Family and friends could not reach Etta, so Elaine called the police and filed a missing person’s reort. It turns out Etta had gone to Canada with her girlfriend, Andi.

In a new clip that emerged today, Etta and Andi were at a convenience store in Canada. Etta looked tired and hopeless as she said to a Chinese man at the store, “I want to find my father… My mom… I know. But my mother….” The footage was taken from the store’s security camera.

After watching the clip, many people felt sorry for Etta. As Jackie Chan‘s (成龍) illegitimate daughter, Etta faced immense pressure while growing up. Jackie did not want Etta in his life and failed to financially support her all these years, but Etta was still curious to meet her famous father. A source close to the Ng family revealed earlier, “After moving back to Hong Kong and constantly seeing Jackie’s news, Etta wanted to see her father even more. But Elaine is against the idea, so they are always arguing about it. Etta grew more rebellious and unfocused at school. Etta knows that her mother loves her, but without a father figure for so long, she feels it is an incomplete [family].”

Teenage angst hit Etta full force while growing up. She had called the police on Elaine for physically abusing her. Last year, Etta was hospitalized for suicidal tendencies and was spotted with more than 20 cuts on her wrist. She announced she was gay and in love with 30-year-old Internet personality, Andi. Running away from her mother’s home, Etta moved in with Andi. As if this was not enough drama, Etta and Andi left for Canada without telling Elaine, who panicked over her daughter’s safety.

As many interpret Etta’s behavior to be a cry for help, Jackie had admitted earlier that he has burdened Etta. “Yes, I have hurt her.” But Jackie did not want to officially see Etta. “I know I am a celebrity, but don’t give me too much attention! If I see her, I’ll see her. I’ll do whatever!”

Elaine’s Response: “It’s a Test for Us”

Glad to know her daughter is safe, Elaine did not want to talk about the situation in detail. She said to the press, “I’m a little busy now. I’ll talk later.” Elaine was out with a friend and hoping to find a solution to her problems.

Afterward, Elaine posted a message on social media, “Each experience is a test from our Heavenly Father, to see how we will resolve our problems: with a kind or vicious heart. Karma. Each day we will learn. Grateful for every day.”

11 comments to Etta Ng in New Video Clip: “I Want to Find My Father”