Joyce Cheng Once Begged Her Boyfriend to Not Leave Her 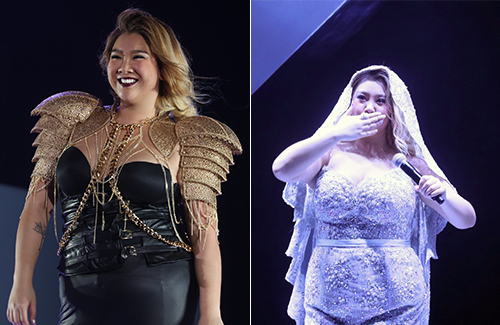 The 29-year-old made her first appearance like a warrior, in a gorgeous black corset with golden shoulder ornaments. Waving her flag, Joyce sang the anthem “Breaking Up is Common Sense” <分手是常識吧>, a fast-paced rock number from her latest album, Joyce.

“It’s been six years since my debut as a singer,” said Joyce tearfully. “Now I can finally perform at my own solo concert. I’m so happy! I’m such a mess right now. I’ve forgotten what I was supposed to say!”

Being the daughter of famous parents, Joyce suffered media scrutiny since an early age. Criticized for her weight, Joyce went to great lengths to shed her pounds. But even after getting skinnier, Joyce wasn’t happy.

The breakups of her past relationships also took a toll on Joyce’s mental health. At the concert, Joyce went candid about her past relationships. Before performing her new song “No Superficial Injuries” <無表面傷痕>, Joyce told her audience, “I know everyone sees me as a strong person, but I once went to the point of kneeling and begging for [my boyfriend] to not leave me. I had completely let go of my dignity. In the end, he still left. I completely changed as a person after that. I felt like I had lost myself. I couldn’t even recognize myself when I look in the mirror. I would have never expected myself to end up like that. So right now, I want to let out all of my negative energy. We shouldn’t dwell on breakups. There’s no problem to that.” Joyce had been in two known relationships since her debut in the industry. She dated Mark Ryan for five years, followed by some dating rumors with the Korean model Jin Choi (崔豪進), which was never confirmed. Two years ago, it was revealed that Joyce was dating fashion photographer Silas Lee, who said he did not mind Joyce’s heavier weight. They broke up last year.

“No Superficial Injuries”, her latest single, was recorded right after splitting with an ex-boyfriend. Joyce had trouble recording the song, as the lyrics triggered memories of him. She never revealed who she was talking about, but the boyfriend is speculated to be Silas Lee.

After singing a tearful but satisfying goodbye to her past loves, Joyce went back on stage to perform dance tracks. Joyce even attempted a backflip, wowing all her fans. When she slipped and revealed her bra, Joyce joked, “Let me slip my bra back in first!” Joey Yung was the night’s surprise guest performer. She appeared during the encore, and sang Joyce’s debut hit “People with Stories” <有故事的人>.

Joey said, “Here’s what Joyce and I share in comment: we’re not the kind of women who would make our male audiences drool when they see us. We make them roll their eyes! Since we cannot be your ideal type, we can be the type you’ll fall in love with when you hear our voices.”

It was an emotional night for Joyce. Towards the end of the show, Joyce shed some final tears, and said, “I know I’m not the greatest person. I have a big temper and am very forgetful. I’m always asking questions and I’m always feeling worried. I’d think I could do everything on my own and wouldn’t let people to help me, but it just gets troublesome for everyone in the end! I know everyone cares about me. I can see it. I know I’m not alone.”