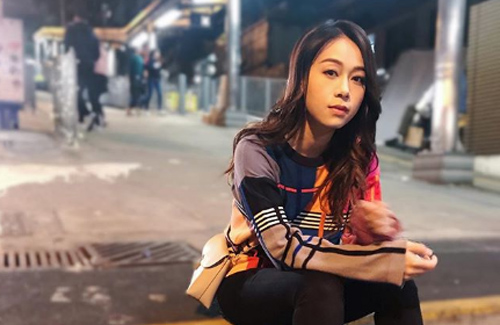 It has been over a year since Jacqueline Wong (黃心穎) and Andy Hui’s ( 許志安) cheating scandal, and all of the involved parties are trying to move on. Jacqueline’s ex-boyfriend, Kenneth Ma (馬國明), just confirmed his budding relationship with her good friend Roxanne Tong (湯洛雯), and Andy is making a comeback on ViuTv’s music show. On the other hand, Jacqueline has no work planned and has been staying home to take care of her nephew and dog. She has been quiet other than giving her blessings to Kenneth on his new relationship.

Yesterday, she broke her silence by sharing a post on her Instagram. She shared a post from a romantic relationship columnist about overcoming difficult situations in life and added a comment in English, “My sister sent me this. And lately I’ve been receiving a lot of messages asking if I’m ok. This quite summarizes it. Thank you and don’t worry, life only gets better.”

The columnist’s post mentions that some people will encounter very difficult situations, but there is no need to avoid or complain because this is their suffering to bear, which will allow for personal growth. The columnist urged others to face their own obstacles because, “there are people that you thought would stay by your side during difficult times, but actually that person only has the ability to accompany you to the peak, but does not have the courage to accompany you down to the valley and will ultimately disappoint you. There are people and things that you thought were very important and that you must have, but when you reach this fork in the road, you realize it was not important at all.”

It seems that Jacqueline really resonated with the columnist’s post. The timing of her post with notable new developments in Kenneth and Andy’s lives may have been coincidental, but Jacqueline’s words left netizens wondering whom she was referring to, and whether she was disappointed by Kenneth or Andy?

Kenneth Ma and Roxanne Tong’s Relationship is Getting Serious Fast!

Cheating Scandal Made Andy Hui Into a Better Person

23 comments to Is Jacqueline Wong’s Cryptic Post About Kenneth Ma or Andy Hui?