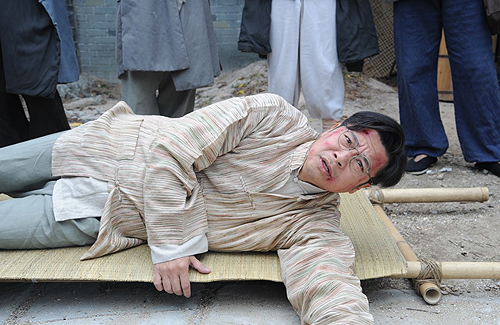 Praised for its interesting plot and fast-paced storyline, the latest episodes concerning Timothy’s relationship with daughter, Jessica Kan (簡淑兒), surprised viewers by its sudden twist. Initially introduced as the loving and caring father who raised Jessica on his own, Timothy’s character as the widower took an unexpected 180-degree turn. Although often seen overly doting and caring of Jessica, Timothy became so drunk one night that he mistakenly thought Jessica was his late wife.

After the rape attempt was thwarted by neighbor Jess Shum (沈卓盈), Jessica tried to escape the village with Brian Tse‘s (謝東閔) help. Unfortunately, their escape was hindered and she was brought back to the village center where villagers threw rocks at the couple.

While it seemed as though TVB finally gave Timothy a chance at portraying a good, loving father for once, this idea was too good to be true. With Timothy falling into this typical creepy role once again, Jessica comes to his rescue and denies that Timothy is like his character in any sort. Recalling her conversations with the actor when cameras were not rolling, Jessica laughed, “Timothy is hilarious – he always has to tell us that he’s a good guy and he’s not a bad person.”