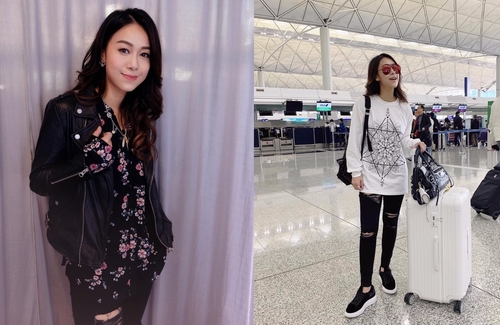 Last April, Jacqueline Wong (黃心穎) lost everything when she was caught cheating on Kenneth Ma (馬國明) with the married Andy Hui (許志安). The shocking scandal destroyed both her career and relationship all at once when TVB halted her work and froze her indefinitely while her boyfriend of three years, Kenneth, dumped her. Jacqueline fled to the United States to avoid public scrutiny, and she was rumored to have changed her name and switched to the real estate profession. After a long eight months, Jacqueline finally returned to Hong Kong from Los Angeles this morning.

It is speculated that TVB forgave the actress when they finally aired her anniversary drama Finding Her Voice <牛下女高音> not long ago, but some viewers threatened to boycott the series. As for Jacqueline, she began emerging on social media again to test the waters. However, she has not been able to calm the public’s anger, especially since she only issued an online apology.

Since TVB will broadcast her other drama, The Maid Alliance <丫鬟大聯盟> in which she plays a leading role, it is unclear whether she will promote the drama. Are plans in place to pave the way for her return to the entertainment industry?

When reporters reached out to Jacqueline’s ex-boyfriend Kenneth to ask if he knew about her return to Hong Kong, Kenneth said, “I didn’t know, I have no response.”