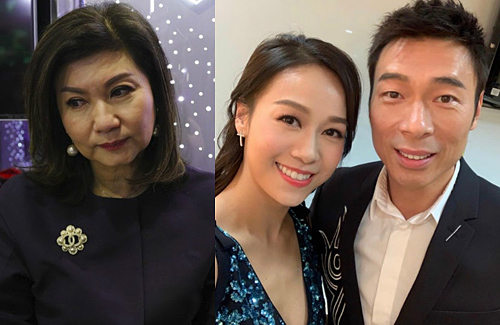 After Andy Hui (許志安) and Jacqueline Wong’s (黃心穎) affair came to light, both parties halted their work and went on a hiatus. As Jacqueline has a long contract with TVB, there are many questions on how her scandal will affect her career.  To get more insight on the situation, TVB executive Virginia Lok (樂易玲) was contacted and she provided updates on Jacqueline current state.

Virginia revealed that Jacqueline is currently in Hong Kong, and shut down rumors that the actress had left for Canada. Continuing on Jacqueline’s health, Virginia said, “Yesterday I was in contact with her. I know she is emotionally unstable and kept crying.” When asked if she is worried that Jacqueline will harm herself, Virginia shared, “Her sisters and I are watching after her. People don’t need to worry.”

Undoubtedly the scandal impacted Jacqueline‘s career and Virginia did not deny the situation. Virginia shared, “Frankly, it really affected a lot of work. The company had to rearrange a lot of work, including stage appearances and overseas work. We were able to take care of it and replaced filming with other artistes.”

In addition to affecting filming schedules, the scandal also impacted contracts with sponsors. In response, Virginia said, “The clients have been very nice and they are satisfied with the arrangements. They didn’t ask for compensation.”

Due to the scandal, there were questions if Jacqueline’s filmed performances will be pulled back and if her contact will be nullified. Virginia responded, “I don’t know when it will be aired. I hope that the matter will pass quickly. We haven’t thought about the contract; she still has a very long contract. It was Jacqueline’s decision to temporarily stop her work because she is unable to work right now. She needs time.”

Although Andy and Kenneth Ma (馬國明) came out publicly to speak of their opinion of affair, Jacqueline remained out of the public eye. Virginia provided the following, “Wait for when she is ready. Right now is not the time. We are still very worried about her.” Praising Kenneth, Virginia continued, “He is very professional and a good man. Good men like him are extinct.”